The Falling in Love Montage, by Ciara Smyth 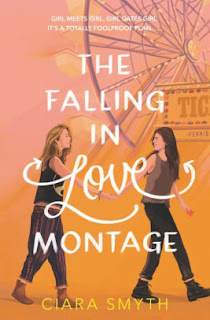 Saoirse isn't much of a believer in love.  Aside from one major girlfriend and being the handy available partner to every girl in school who wanted to experiment, Saoirse hasn't had much experience.  She certainly doesn't find much love at home.  Mom's confined to a nursing home with early onset dementia and hardly even recognizes her daughter. It would seem that even a mother's love is temporary.  Dad's gone ahead divorced her and is going ahead and remarrying, further proving that love is temporary and nothing lasts forever.

None of this stops Ruby, obsessed with romantic comedies, from trying to interest Saoirse in a fling.  Ruby's only staying the summer and will university approaching, no one is looking for forever anyway.  Instead, she proposes a virtual "falling-in-love montage" just like they do in the rom coms.  Armed with a list of common thing that happen in romantic comedies, the girls set out to have a whirlwind summer romance that will help Saoirse cope with her feelings of familial abandonment.

A functional romance but unremarkable and hard to get into.  The plot (girl forswears love yet falls in love in the end) is utterly predictable and surprisingly short on spark or drama between the two girls.  The novelty of this being a lesbian romance isn't really that novel anymore.  The tension between Saoirse and her father over how he has treated her mother fizzles as well (although I'm not sure where Smyth could have taken the story and it seems like one of those things that looked better in outline than fleshed out).  The most interesting relationship in terms of growth is actually Saoirse and Ruby's straight cousin Oliver, who go from enemies to actual friends by the end of the story.  It works well, with Oliver ironically assuming the role usually played by the gay friend.