Willa and the Whale, by Chad Morris and Shelly Brown 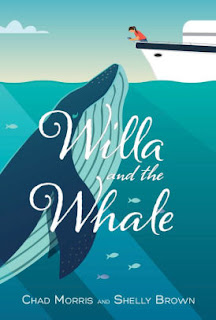 After the death of her mother, Willa returns to the Washington coast to live with her father.  Before she died, Mom was a marine biologist and instilled a great love of the ocean in Willa.  Early on, her father takes her out for a whale watching trip and, during the outing, Willa is surprised to find that a Humpback Whale named Meg is talking to her!  In subsequent weeks, Willa and Meg become close, with the whale offering advice to Willa about how to handle the loss of her mother, her problems integrating into her new home, resolving trouble at school, and fixing things with an old friend.  These issues are big, but nothing compared to Willa finding a giant Blue Whale run aground on her beach.  To solve her greatest problem yet, she has to round up family, friends, and her whale friend.

A rewarding middle school reader about problem solving.  Willa has a wide variety of issues (including grief, family conflict, rebuilding friendships, jealousy, and accepting failure) but addresses each of them in a positive way.  Her strength, which comes through again and again, is that she thinks through her problems and does her best.  She does not always succeed, but gains strength even from her failures.  The wide diversity of issues threatens to make the novel seem unfocused, but the unifying theme is the power of communication, seeking help from others, and creative problem solving.  The result is a warm book with a positive message that even the most terrible issues can be solved and that what initially seems like failure is simply the first step towards eventual success.

As an added bonus, frequent fun facts about whales which are sprinkled throughout the book make for entertaining Google searches for inquiring minds!