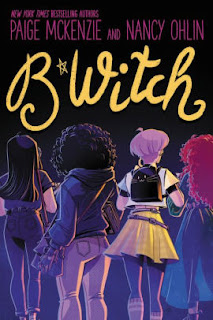 What if all those spell books and guides to witchcraft you checked out of the library and studied had actually worked?  Where lighting candles with your besties and doing incantations could keep your little sister from barging in or get your parents to forget a bad grade?  How would your life be different practicing magic in middle school?

Not that one would do so out in the open.  Technically, practicing witchcraft is against the law in this alt reality, but until the arrival of the current populist president and his "antima" (anti-magic) goons, it was something which you could get away with.  But his movement to crack down on witches has gained a lot of attention nationally and violence against witches is on the uptick so you can't be too careful.

There are two covens surreptitiously operating at school.  Greta's group has three members who use their magic to help each other, whereas the rival coven (headed by Greta's ex-bestie Div) use their magic for less nice things.  When two new girls show up who both show a knack for witchcraft, the two covens compete with each other to try to recruit them.  But when a series of threats surface, they realize that they have bigger issues to deal with and it is time to band together.

A fun romp that imagines how magic would change middle school.  Populated with well-drawn characters, the authors do a fine job of capturing young adolescents in a way that will make them imminently relatable to readers.  It's chock full of clever ideas and packed with satire.  But ultimately the book is burdened by trying to do too much.  One of the girls is on the spectrum.  One of them is trans (and uses her magic to pass as a CIS girl).  Racial and ethnic diversity is represented.  Criticism of MAGA is made.  All boxes are checked.  But in trying to do so much (and throwing in a large number of fed herrings along the way), the literally anti-climactic resolution is underwhelming.