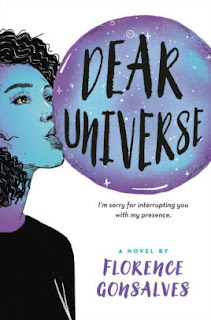 Senior year and a life of avoiding life's questions has left Cham (short for Chamomile) with anger issues and a serious case of writer's block on her college essay.  Her father is dying of Parkinson's but Cham would rather think about Prom and graduation.  The problem is that neither of those goals address her growing sense of ennui.  With a tongue-in-cheek nod to Camus and a lot of sass, Cham ponders the many questions she wants to ask the universe, ranging from why her father has to do to whether her dress makes her boobs look big?

There are some great moments of humor and no small number of lovely insights here, but it takes a bit to extract them out of an aimless novel.  Cham's cynical and vulgar humor makes her entertaining as a protagonist and brings an edgy (and raunchy) quality to the novel that I normally associate with male protagonists.  But once you move beyond the things that make her funny, she comes off initially as shallow.  It really is not until two hundred pages have gone by that I started to warm to her when I realized that the shallowness was really just denial.  By that point, I was almost too far gone to care.

For a book about dying, it's strange that dealing with grief and coming to terms with death (the two usual themes for a dying-person book) are barely addressed at all.  In fact, resolution is largely lacking from the story.  By the end of the story, Cham hasn't exactly found any answers to her questions and she is pretty much as paralyzed by her ennui as she was at the beginning.  Clever and funny, but ultimately without resolution or conclusion, existential dread for adolescents does not make much of a story.