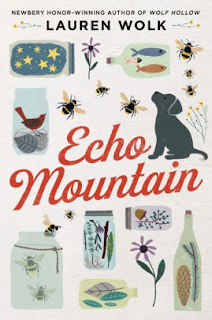 When the Great Depression came, Ellie's family lost everything and were forced to move out of town and into the woods, to live on the side of Echo Mountain.  It's a hard transition for Ellie's older sister and mother, but for Ellie and her little brother, life in the woods comes naturally.  Ellie's mother worries that Ellie is growing "wild," which is her way of noting that Ellie is braver and more assertive than Mom and her sister.  But after her father is injured and falls into a coma for months, these are useful traits to have as everyone has to step forward.  Because Ellie is blamed for her father's injury, she feels a particular obligation to bear the burdens of taking care of things and she rises humbly to the challenge.  It's a hard life but Ellie finds small joys in helping her neighbors and taking care of a puppy.

One day in the woods she encounters an old dog she doesn't recognize who leads her up the mountain, where she has never been (although her father always said that there was a "hag" up there).  Instead of a witch, Ellie finds an old lady who needs her help.  Helping her, in turn, opens up Ellie's world, revealing a talent for healing, an intuitive sense of how to fix what is broken, and insight to recognize what physical and psychic ailments people carry with them but are reluctant to share.

In this beautifully written novel, Lauren Wolk creates a story of a girl rescuing her neighbor, her family, and ultimately herself.  I read so many dystopian novels full of suffering, issue books about people with creepy problems, and message books exposing the hypocrisies of the adult world, that I forget that there are children's books like this:  about people living amidst each other, doing normal things, and making their small part of the world a better place.  The book comes with lots of adventure, a resourceful and humble-to-a-fault heroine, and a feel-good message about how neighbors can help neighbors.  While set in the Great Depression amongst rural poor people without a penny to their name, the story itself is timeless.  A deceptively simple story of a girl growing up (just a little) that illustrates the true power of children's literature to entertain and enlighten.  Obviously recommended!