If These Wings Could Fly, by Kyrie McCauley 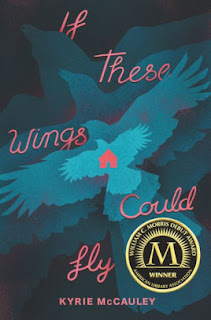 The town of Auburn is struggling under a freak migration of crows.  Thousands and thousands of the birds have arrived and cover everything.  With their penchant for stealing things and getting into mischief, the residents see them as a tremendous nuisance.  But Leighton has bigger problems to deal with:  a desire to graduate and move away, a reluctance to open her heart to others, and a lack of safety at home.

Bearing the festering emotional wound of being the boy who lost the town's last chance at a football championship nineteen years ago, her father has grown from a hurt young man into a violent and abusive father.  In her younger years, his outbursts were infrequent but now they happen nearly constantly.  In her last year at home before she hopefully goes away for college, Leighton tries to encourage her mother to stand up to him.  But when Mom refuses to do so, Leighton has to focus on keeping her younger sisters safe from their father's rampages.

In this bleak environment, Leighton cannot count on adults for help.  The grownups of Auburn largely turn their backs and ignore the problem.  Instead, she finds comfort in her boyfriend Liam and from two stranger sources:  her home itself (a house with walls that repair themselves and protect the girls) and the birds.  Crows are intelligent creatures with the capacity to remember slights and the ability to understand reciprocity.  Somehow, these birds seem to understand what is happening and help Leighton and her family but stealing things from Dad or leaving useful gifts.  So, while the town sees the crows as a nuisance, Leighton comes to understand that they are crucial for her survival.

A well-written, albeit terribly grim and depressing, story of domestic abuse.  McCauley's foray into magical realism, through the birds and the house is ambitious and fraught with creative tension.  On one hand, she wants to create a manifesto against domestic violence and the text occasionally digresses into policy.  But on the other, McCauley is taken in by the literary majesty of the crows and the house as extended metaphors and even crucial plot devices.  This conflict of purpose is most pronounced in the ending, where a literal reading of the resolution is almost impossible.  Does the house itself rid Leighton of her father's abuse?  Do the birds really physically interfere?  Or is it all metaphor for the family rising up and standing up against the father?  There's no way to really know and that leaves the otherwise fairly sober analysis of the causes for domestic violence and the societal forces that allow it to flourish subject to a literary whimsy -- poetic and beautiful but perhaps off-message?