Letters from Cuba, by Ruth Behar 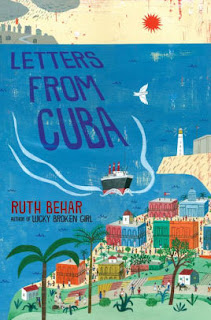 By the late 1930s, thanks to economic pressures and the rise of anti-Semitism, it was becoming clear that Esther's family could not stay much longer in Poland.  But where to go?   The United States was a dream, but Jews were generally not welcome.  So, Esther's father decides that they should go to Cuba and heads out in advance to establish a foothold there for the family.  The plan was that he would then bring over his eldest son to help him, but when he contacts them, Esther convinces him to allow her to come next instead. Missing her family (and her sister Malka most of all), Esther starts a series of letters to Malka that recount her difficult journey across Europe and the Atlantic, and the process of settling in her new homeland. While Esther and her father manage well enough, they are under pressure to earn the money the need to buy tickets and bring the rest of the family over before the doors close.

Cuba is a delightful place, but complicated and so very different from Poland!  There are so many different cultures, ranging from the wealthy descendants of Spanish landowners to the people whose ancestors were brought as slaves.  And there are also immigrants from all over the world, like Esther, trying to build new homes.  Cuba is a place where the nearby shop is owned by Chinese who sell her Polish tea!  Even in the small town where they live, there are a dizzying array of traditions ranging from the Catholics to the Afro-Caribbean tribal beliefs brought by the slaves.  But as friendly and kind as their welcoming is, the forces of anti-Semitism are present even here.

In general, Esther and her father have incredible luck and good fortune generally follows them.  The story is soft and kind and mostly stress-free.  That can make things dull.  Esther herself is nearly perfect in every way, from her ability to sew beautiful well-fitted dresses with no assistance to her talent with befriending just about anyone, it is hard to see her as an eleven year-old girl.  A few minor flaws would have fleshed out her character and humanized her.

The real charm of the book is its subject matter.  Having never realized that pre-Revolutionary Cuba had a sizable Jewish contingent, I found this book utterly fascinating.