The Assignment, by Liza Wiemer 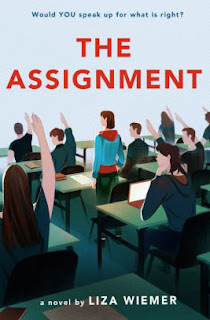 Cade and Logan are shocked when their World History teacher assigns the class the opportunity to debate the Nazi's Final Solution.  The assignment, which the teacher argues is a chance to get inside the head of the men who made the decision to exterminate millions of people's lives, seems to Cade and Logan misguided at best and downright immoral.  More shocking than the assignment, though, are the reactions of their fellow classmates, ranging from treating it like a joke to exposing deep seated racism.  Cade and Logan want the teacher to cancel the project, but when he refuses to do so, they go to the media, which leads to greater ramifications than anyone ever imagined.

A tense, fast-reading novel that tackles an all-too-real issue in contemporary society.  Stories of similarly ill-thought-out classroom activities hit the news seemingly every month (and many more go unreported), making the premise particularly relevant.  Wiemer does a particularly nice job of slowly unfolding the nature of the threat.  As the story begins, I did entertain my doubts.  The teacher seemed pretty reasonable and the assignment (as he explained it) had pedagogical merit (although it was quickly subverted by racist students).  The administrative ambivalence felt realistic and it was a bit easy to eye the kids as hot heads.  The gradual crystallization of the fundamental problem with the assignment, combined with the way the community got sucked in by its poison is what really makes the novel effective.  And by the end, any ambiguity is lost:  the danger as clear as day.  Wiemer throws in a bit extra in the end, which in my mind is not really necessary, but it works.  The message that hate ultimately corrupts and destroys itself is realized.  It's probably fodder for an assigned reading in a classroom, but that should not detract from the fact that I  enjoyed the book and found that it gave me things to think about.