The Blackbird Girls, by Anne Blankman 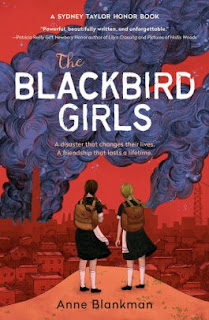 Valentina Kaplan and Oksana Savchenko can't stand each other.  To Valentina, Oksana is a bully who wants only to taunt her at school and is always getting her into trouble.  As a Jew in Russia, her mother has instilled in her the importance of keeping a low profile. For Oksana, it is more complicated:  her abusive father is jealous of Valentina's father because he is obsessed that Valentina's father "stole" his promotion.  It's the sort of thing that dirty cheating Jews do all the time, he insists.  Oksana is convinced that she can win back her father's love and stop her father's physical abuse by humiliating Valentina.

But this middle school drama is upstaged when the nuclear reactor near their little town of Pripyat experiences "an unsatisfactory radioactive situation." Valentina first notices that she no longer can find any birds or small animals, the air is full of blue smoke that tastes metallic, and the streets are filling up with policemen wearing gas masks. But life goes on and both girls go to school.  They can see the burning building, but they have faith that everything is under control.  Valentina and Oksana's fathers (who both work at the Chernobyl plant) have not returned home, but surely that means that they are simply busy doing their jobs?  Only after a day do they find out that they are being evacuated with their mothers.  In the chaos of that move, the girls are forced to separate from their family and are sent together to live with Valentina's estranged grandmother.  Once enemies divided by age-old prejudice, the two girls have only each other to rely on in their brave new world, set in the last years of the Soviet Union.

At the time depicted in this novel, I was studying Russian children and young adults for my senior thesis (and made a number of trips to the Soviet Union) so I know it well.  The chaotic response to the Chernobyl disaster is well-documented and makes for compelling drama (as shown by the recent mini-series) but I don't believe there has been a children's story set there before.  I have small quibbles about inaccuracies that don't detract from the story so much as distract me as a knowledgeable reader: an incorrect depiction of school uniforms or the odd age of Valentina's grandmother (while it is critical to the story that the grandmother was a young girl during the Great Patriotic War, it doesn't seem likely that she could have been as it sets the timeline off by at least ten years).

This story struggles to find its target audience:  the protagonists are too young for YA, but the graphic child abuse scenes and threatening situations make it too intense for most middle grade readers.  The story's bigger flaw is its very busy little plot.  Two children escaping Chernobyl would be compelling enough reading, but the subplot about Valentina's grandmother fleeing Kiev during the German invasion is a bit much.  It gets tied in, but there really are two separate (and excellent) stories here to tell.  Attempting to tackle anti-Semitism and domestic violence at the same time on top of all this is just too much and neither topic is handled particularly well.  Lots of good stuff, but it is in desperate need of trimming and focusing.