Time Travel for Love and Profit, by Sarah Lariviere 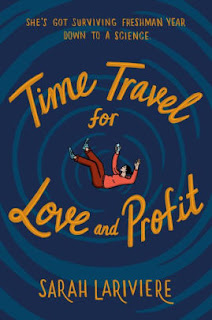 When Nephele enters ninth grade, she discovers that her obsession with math is no longer cute.  In fact, it's decidedly un-cool.  Her best friend deserts her for dance and the rest of her class turns against her and treats her like some sort of freak.  Looking back, she wants to figure out a way to have a do-over.  So, it seems like destiny when, in the stacks of her parent's book store, amidst the steamy romance novels she likes to read, she finds the solution:  a self-published guide called Time Travel for Love & Profit.  Promising that time travel is the ultimate way to improve one's life, Nephele is convinced. While the book is a bit thin on details, Nephele is confident that she can work on the quantum theory (it's only math, after all!)  So, she spends the summer building a time travel device in her smartphone, with only the company of an old photograph that Nephele believes can talk.  Just before the first day of school, she sends herself back to the start of Ninth grade so she can set everything right.

But things don't go so well.  She sends herself back, but the rest of the world continues forward.  Yes, she's a ninth grader again, but her former classmates are now in tenth grade.  In meddling with the timeline, she has disrupted events and created paradoxes that interfere with reality.  So focused on fixing her life, she has changed more than she expected.  So, after a year of redesigning her "timeship," she has to go back again to fix things.  And when that makes the situation even worse, she's stuck doing it again and again....  By the time she's tweaked her calculations ten times (reliving her first year of high school each time), space time has grown so warped and distorted by paradoxes that life itself is threatened.  And that is when she meets a strange and peculiar boy named JJ who will change her life.

Time Travel for Love and Profit is hands down the weirdest book of the year. It lacks the cuteness of the film Groundhog Day or Wendy Mass's novel 11 Birthdays, and instead probes the creepy side of time travel (think the 2004 math geek film, Primer).  Time travel makes less sense the more you think about it so the most entertaining stories in the genre have succeeded by thinking about the math as little as possible.  Lariviere, on the other hand, goes the other direction:  thinking so hard about the causes, effects, and ramifications of distorting the progression of time that just about everything (ranging from people's memories of Nephele to the progress of humanity) breaks down.  The outer manifestation of this is the disintegration of the narrative itself.  By the end of the book, the story itself has pretty much lost its coherency.  On one hand, that's pretty effective story telling, but for me, a self-destructive novel isn't really entertaining.