Tune It Out, by Jamie Sumner 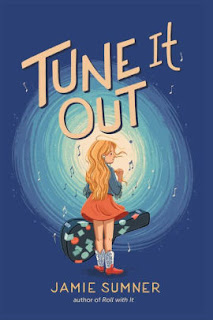 Lou has a great singing voice, which her mother likes to put out front and center when they are busking.  It brings in better tips and, heavens knows, living out of their truck that they can use all the money they can get.  But performing in front of people is hard for Lou.  Loud noises hurt, being touched by strangers is painful, and crowds freak her out.  Lou has tried to explain that it's much worse than stage fright, but Mom won't listen to her.  And there really is no choice since they need the money to get by.

But when a snowstorm and an auto accident brings Lou's living situation to the attention of Child Protective Services, Lou gets sent to live with an aunt and uncle she barely knows.  They turn out to be quite well off and generous and, for the first time in years, she is able to go to school (which is both a blessing and a curse since schools are noisy places).  There, a counselor helps Lou explore the possibility that she may struggle with Sensory Perception Disorder, which would explain why public performance is so hard for her.

Lou is a strong (albeit stubborn) character and I liked her.  She's bright and the conversations she has and the questions she asks are insightful (to the point that they sometimes seem uncharacteristically mature for the alleged age).  In the context of a middle reader, that just makes thing simpler, the questions to be answered more direct, and the story ultimately more satisfying.

Ostensibly, there is very little new and original in this book.  Neglectful parenting, living out of cars, and skirting the law (usually combined with a fortuitous wealthy bailout) is a popular genre.  We certainly have plenty of books these days about children on the Autism Spectrum.  That said, this is a competent rendering of the familiar story.