A Ceiling Made of Eggshells, by Gail Carson Levine 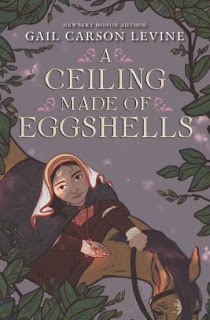 Loma loves little children.  Living in a big family, Loma has plenty of younger siblings and nieces and nephews to take care of.  While she is young, she dreams of getting married and having many of her own.  When she asks Belo, her grandfather, he always demurs.  She's his favorite granddaughter and an indispensable traveling companion on his trips. She takes care of him during their travels and he refuses to let her leave him.  And he, in turn, has become an essential player in protecting the Jews of Spain, which makes her just as indispensible.

It's the fifteenth century and Jews live uneasily alongside the gentiles on the Iberian Peninsula, but that is about to change.  For little Loma, there is her longing to keep her family together and one day start one of her own, but the bigger existential concerns are overtaking such fragile dreams.

An exciting historical novel that is more entertainment than history.  It gives readers a sense of the key features of the period (the ever-present fear of anti-Semitic violence, the role of social status, and some elements of everyday life), but Levine isn't terribly attached to the need to achieve painstaking accuracy.  She has a story to tell with a strong and independent heroine who is quick on her feet and sharp witted.  With a large cast of characters and a timeline that lurches forward in service of keeping up the pace, Levine doesn't put much into any one of them.  Even Loma and her grandfather, who are the central players, never really develop their relationship.  Loma is devoted to Belo and while she occasionally expresses resentment, those feelings are not explored.  That keeps the pace going, but makes the book unremarkable.