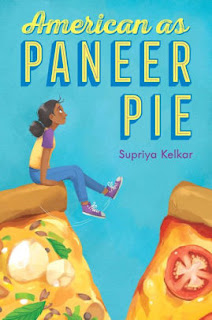 Being the only South Asian in her school has always been difficult.  Lekha has managed it by keeping a low profile -- ignore the teasing, smile when someone asks an offensive question, and play down the differences.  So what if the other kids don't understand the importance of Diwali?  Or if they make fun of the food you eat?  But even though Lekha thinks she manages pretty well to fit in, it's hard to say that she's happy, but she consoles herself with the idea that it's a decent way to get by.

When a new Indian girl named Avantika moves in nearby and she turns out to be Indian herself, Lekha is excited to no longer be alone.  And she is determined to help Avantika keep a low profile as well and help her fit in.  But to her surprise the girl has totally different ideas.  She isn't afraid to stand up for herself and confronts their classmates' prejudices head on.  With a bravado that Lekha has never been able to manage, Avantika puts her appeasement to shame.  Hurt and embarrassed, Lekha betrays the girl.

Then a series of racially-motivated attacks (one involving family friends far away and the other incident very close to home) open Lekha's eyes to the importance of standing up for yourself and not allowing people to shame you into pretending to be someone that you are not.  Lekha feels compelled to act and finds her voice.

While at times preachy, Kelkar's story of a young woman's search for identity and for self-confidence is a natural heart-warmer.  One hopes that its descriptions of a nativist race-baiting politician will become dated, but the overall story about being proud of who you are and the importance of standing up for yourself will never grow old.  You don't have to be a South Asian kid to relate to the story:  Anyone who has ever been reluctant to defend yourself for fear of "offending" others knows very well the pain that Lekha goes through and how difficult it is to overcome that fear.