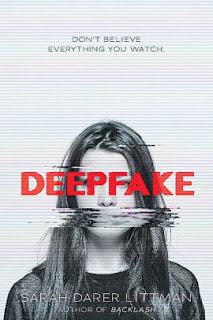 At Greenpoint High, nobody knows more about who is doing whom or who got in trouble than the anonymous poster of Rumor Has It.  For years, the blog has been posting the juiciest gossip.  And while no one wants to be a subject of the blog, everyone likes to read it.  All the more so when the gossip involves the two smartest seniors in the school.

Dara and Will have been neck and neck for the valedictorian spot and, for at least the past couple of months, they have also been secretly dating.  When their secret is blown by Rumor Has It, no one is more surprised (and hurt) than Will's best friend MJ.  She can't believe that Will wouldn't confide in her.  Coupled with her recent rejection by her first choice school, life really seems to be going downhill fast for MJ!

But even MJ's issue pale in comparison to the trouble caused when Rumor Has It posts a video that shows Dara accusing Will of cheating on his SATs.  Will's spectacularly improved SAT scores come under scrutiny and he finds his own college chances now in jeopardy as he struggles to clear his name.  Given that she's his girlfriend, why would Dara even make such an accusation? She claims she never said the words, even though everyone can see from the video that she did.

A clever story that takes the controversy around deepfake technology and places it in a high school milieu.  Some elements of the story are a bit of a stretch, but Littman has crafted a fun mystery that starts off with a bang.  The middle drags, but the story picks up again at the end as the blogger behind Rumor Has It falls into their sights.  This isn't classical literature and it will age very poorly, but it is an entertaining quick read and a pleasant way to spend an afternoon.