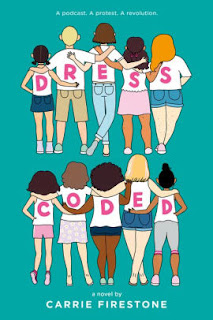 As if middle school, with all of its emotional drama and body changes, were not stressful enough, Molly is tired of the way the school's dress code.  Everyone knows that the rules are only applied to the girls (and the ones that are more developed at that!).  This is hardly a minor annoyance.  Beyond the emotional trauma of having attention drawn to their bodies by (male) adults, the girls who are called out miss classes (and even exams) that they are not allowed to make up.

Molly and her friends are near graduation, but when Molly's friend Olivia is humiliated by the principal for trying to cover up an embarrassing stain and then blamed for the cancellation of an end-of-school camping trip, Molly decides to take action.  She starts a series of podcasts interviewing other students who have been victimized by the policy and discovers that the impact of the code is further ranging than even she imagined.  Eventually, the podcasts trigger a social protest that draws notice from the community.

A great topic for a middle grade read.  It's handled a bit clumsily here in two ways:  First, by making the school administrators particularly incompetent, which makes defeating them far too easy.  This makes the story satisfying, but doesn't really give fair time to other points of view that could have made this topic more interesting.  For example, a fleeting reference to school uniforms would have made a powerful counterpoint that Molly and her friends could have addressed.  The second weakness of the story is the plethora of sub-plots.  Middle school is a busy time so naturally Molly and her friends have plenty of other things on their mind.  That's fine, but I'm not sure what particular value the struggles of Molly's older brother with addiction added to the story?  I kept waiting for that to get tied in, but it was basically a separate story altogether.

The book is a fast entertaining read about an important and relevant topic, but it could have been better with more exploration of dress codes and their pros and cons, and fewer distractions.