Something Happened to Ali Greenleaf, by Hayley Krischer 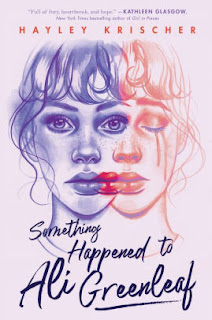 My wife never asks me why I read children's books, but she does ask me why I read the depressing and distressing ones.  Complete with a book title that sounds like an After School Special, Hayley Krischer's novel covers some extremely intense subjects (rape, sexual exploitation, and drug abuse) in explicit detail, but it does so with great sensitivity and insight.

Ali has a serious crush on Sean.  She's been obsessively scrapbooking about him. While she'd be too shy to act on her feelings, she's over the moon when he invites her to a party.  At the party, when he invites her upstairs and plies her with alcohol, she apprehensive but eager to please.  When he goes too far and brutally rapes her, she is devastated, but afraid to say anything.  Everyone saw her go upstairs willingly.  Sean is a known player.  There were plenty of drugs and alcohol around.  What did she expect?  But even Sean knows that things did not quite go down right (the blood may have been a clue!) and he tearfully  turns to his friend Blythe to help him.  Will she befriend Ali and talk her out of getting him in trouble?  Blythe, desperately in love with Sean herself, will do anything to please him and doesn't hesitate to seek out Ali's friendship.  As one of the "Core Four," Blythe can offer Ali social status and a better life at High School.  All Ali needs to do is forgive Sean or just let the matter quietly go.  What poor wallflower (like Ali) wouldn't jump at the opportunity?

But Blythe's plans start to go seriously off the rails from the start.  The two girls share a common background of maternal abandonment, a similarity that Blythe attempts to exploit, but Blythe finds herself more dependent on Ari than vice versa.  Blythe may be one of the Queen Bees but she got there through a brutal (sexual) initiation she and the other Core Four went through three years ago.  The trauma of that experience and the expectation that she is soon expected to perpetuate it herself has left Blythe more fragile than she expected in the face of Ari's recent experience.  While Blythe thought she was the strong one, it would seem that Ari is actually more together than Blythe.  Ari decides to stand up for herself and ignore Blythe's attempts to get her to forgive Sean, Blythe lashes out ferociously.

While rape culture plays a key role as a catalyst, the story is about how young women respond to that culture as both resisters and participants. My synopsis makes the book sounds exploitative, but it really is not.  Instead of tracking a police investigation and court case, the novel dives in to the psyche of Ari and Blythe -- what makes one girl endure her trauma and come out on top while another who seemingly copes well succumbs in the end?  Neither girl really plays her part. While Ari is the obvious heroine to this story, she is hardly a strong one.  She makes ample mistakes and sometimes simply stumbles.  Blythe is the girl you want to hate for the pure evil of her plot to seduce Ari with a promise of popularity, but in the end her love for Ari is undeniable and the cause of her downfall.  If one doesn't see something to redeem in Blythe, at least there is a lot to pity.  In sum, these are complicated characters with a fascinating codependency.

If it makes any difference to you, the story ends on an optimistic note, but if you don't have the stomach for real dark character studies, this is not a book for you!