The Life and (Medieval) Times of Kit Sweetly, by Jamie Pacton 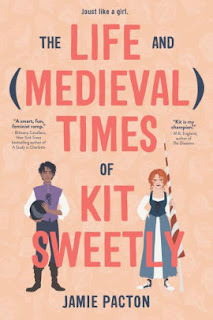 Kit's loves her job at the Castle as a serving wench.  She loves the excitement and adventure at this medieval-themed dinner theater (heavily based upon Schaumberg's Medieval Times), but she hates the sexism of the routine.  The idea that woman did nothing more useful than serve food in the Middle Ages is a stinking pile of horse manure!  She wants to be a knight and ride out and fight the other knights!  She's been training herself for years and learned a lot from her brother who is the troupe's Red Knight.  But corporate policy states that only men can be knights (and incidentally make the better-paying salaries associated with the job).

In response, Kit starts a campaign to force the restaurant to let her become a knight and rallies her girlfriends to the cause by training them to fight with her.  She creates a social media campaign and publicly confronts the company over their policy.  But at the end of it all, does she have all of the skill necessary to truly bring about justice and carry the day?

A bit corny, but it's a romantic comedy with its heart in the right place.  Treat the book as a rollicking adventure, with Kit front and center suffering through an endless series of amusing misfortunes.  The characters are not terribly deep and the story itself is poorly researched, but Pacton can keep the pace up and creates a lively story that gives Kit a chance not only to exercise prowess on the field but also demonstrate the skills of humility, wisdom, and charity that make one a true Peer of the Realm.