When You Know What I Know, by Sonja K. Solter 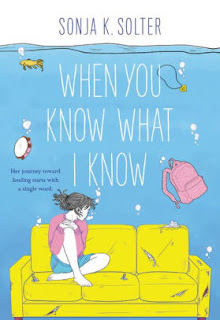 After Tori's uncle touches her in a bad way, she wants to be a good girl and tell an adult, but she has trouble getting the words out.  Her mother initially doubts her story and her grandmother steadfastly refuses to believe that Uncle Andy would ever do something like that! Surely, she has misunderstood!

Thankfully, Tori's mother does see the truth and does the right things in the end, but none of it really addresses the mixture of pain, guilt, and anger that Tori feels.  Telling is hard and more so since Tori doesn't feel that anyone is really listening.  Even her best friend misinterprets Tori's withdrawal as an attack.  And when her father reaches out and offers to take her away, she realizes that he is only using the incident as an excuse to try to regain custody and hurt her mother.

Heartbreaking and poignant, the story is insightful and grasps many of the nuances of childhood sexual abuse.  However, it suffers from the author's decision to tell the story in verse.  As I never tire of mentioning, verse novels can be very powerful but they face a steep challenge in trying to convey complexity in sparse exposition.  The text is pretty, but that isn't really the message that is needed here.  We struggle to really get inside the heads of the characters who wax poetic but never really get the opportunity to bare their souls.