Across the Pond, by Joy McCullough 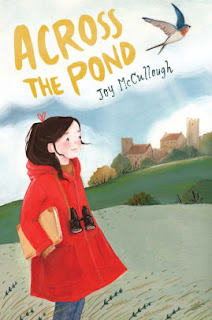 By an unusual chain of events, Callie's family find themselves heirs to a castle in Scotland.  While renovating it will present quite a few challenges, the family decides to leave San Diego and move in.  For Callie, this is far more than a change of scenery, it's chance for a restart.  Her friends have abandoned her and no one will talk to her, ever since she got blamed for getting them all in trouble.  There's nothing she'll miss when she goes and everything to gain by going someplace where no one knows her or her past.

While living in a castle sounds very exotic and exciting, it's really just a dilapidated and very drafty old building.  And not terribly comfortable to boot!  Also, while she hopes that being an exotic American will give her special cachet, she realizes quickly that kids are basically the same and that nothing will fix her fear of going through the same trauma all over again. Her parents, concerned that she's not making friends, deliver an ultimatum that she needs to join a club.  She doesn't play sports or a musical instrument and the idea of being around strangers terrifies her.  In desperation, she tries the local birdwatchers club, but the sexism of the group's leader drives her away.  Still, when she learns that Lady Philippa (the old woman who lived in the castle before them) was an avid birder all of her life, Callie is inspired to follow in her footsteps.  Along with the granddaughter of her groundskeeper and a helpful local librarian, they compete in a Big Day contest against the established club.

There are lots of great ideas in this book, but it's terribly busy.  Is the book about Callie confronting her fears of standing up for what is right ever again?  Is it about the ways that her life mirrors the life of the Lady Philippa (whose story is told in the pages of a diary that Callie finds)?  Is it about helping the gardener's granddaughter come out of her shell?  Is it about girls taking charge and defeating the boys in the contest?  And that's not even covering the inclusion of some trauma involving a cat or the dangerous and forbidden castle keep -- both of which are underutilized as plot devices.  There is, in sum, plenty to talk about here but a plethora of ideas doesn't make a story.  Charming but rudderless.