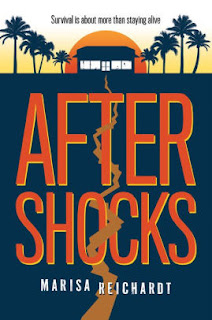 Ruby can't deal with her mother starting to date her water polo coach.  She can't deal with her best friend Mila, whose life is going off the rails and into the bottle.  Even her boyfriend Leo is too much for her these days.  How much worse can it get?

Her answer comes at the laundromat, where she's in the process of getting a cute guy to go next door and buy her beer when the the walls start to shake and the world around her collapses.  It's an earthquake  (not so unusual in SoCal) and it's unlike anything Ruby's ever seen before.  With the foresight to shelter under a table as the building collapses, Ruby survives but finds herself trapped under the rubble.  Charlie, the guy she with whom was just talking, is similarly pinned down nearby.  Suddenly none of her problems seem that big of a deal.  Now she needs to stay alive.

Reichardt's story of survival after the Big One paints a fairly realistic portrayal of the disaster and its accompanying chaos.  As a story of Ruby's struggle for survival and reunion with her family and friends, it makes for an entertaining adventure.  It does less well at trying to address Ruby's life reprioritizations and how the trauma of living through the earthquake changes her life.  That it changes Ruby is very clear in the end, but Reichardt struggles with how to show that evolution and ends up simply making it so.  It is the process of that evolution that is so important to the success of the story and quite a cheat to simply skip ahead to the result.  There's some attempt through flashback to show the precedents for her growth, but without the growth itself, these segments seem wasted and distracting.  Similarly wasted is Ruby's boyfriend Leo, of whom she spends far less attention than she does over Charlie.