Four Days of You and Me, by Miranda Kenneally 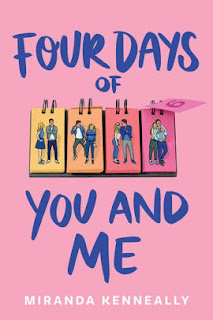 Lulu and Alex have a way of coming together and breaking apart, but whenever they are apart, they ache to get back together.  In a story that traverses four years of high school, but which focuses on four class trips, we track the ebbs and flows of that relationship.  The class trips start modest (local science museum and amusement part) and grow increasingly elaborate (New York City and London).  The relationship grows correspondingly complex.

Lulu and Alex try to manage their fleeting interests in others and the competing claims of their career aspirations (he wants to play baseball and she wants to become an author of graphic novels).  If their career goals seem unrealistic, their relationship seems even more so.  Mostly, they don't seem to be able to keep their hands off of each other (which has an embarrassing habit of making them late for all of their class outings) but they are too emotionally immature to really mean the earnest commitments they make to each other.  Thankfully, the story ends before they do anything stupid.

It's a brisk and easy read, but the lack of an honest spark between Lulu and Alex and the sheer annoying quality of their self-centered personalities makes this a hard romance to swoon over.  The story's timeline ebbs and flows backways and forwards.  Sometimes that works, other times it gets distracting.  Kenneally packs in lots of amusing anecdotes which she has collected, but they feel exactly like that (i.e., anecdotes stuffed in to fill out the story and provide some amusement).  The  moments don't really fit in the story.  Some elements (like the student group from Italy) seem largely thrown away.  In sum, a readable but largely disposable romance.