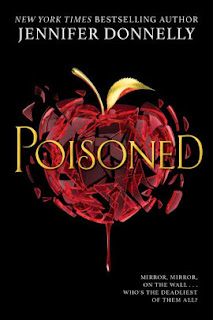 Sophie is a good princess, but she won't make a good queen, so says her stepmother and anyone else who dares to speak of the matter aloud.  She's none too bright and far too timid and soft to be a leader.  She lacks the will to make difficult decisions and punish the people who could hurt her.  Proving her stepmother's point, Sophie is led by her huntsman into the woods and he cuts out her heart.  And so she dies.

"Mirror mirror on the wall!  Who will be the source of my downfall?" the Queen commands.  But despite the fact that Sophie has been disposed of, the mirror insists that it is the princess who is to be the cause of the Queen's demise.  But how can this be?

You'll have to read the novel to find out.

Donnelly's Stepsister was a clever, witty, and ultimately poignant reinterpretation of Cinderella. Here, she takes on Snow White.  But while the formula is intoxicating, the result is less impressive this time out.  Part of the reason for this failure is that the point of the story is a mixture of messages (the importance of confronting fear, the strength of kindness, and the value of ignoring naysayers) that never really gels.  Nor is the revelation that a Grimms tale can be told this way all that revelatory.  Sophie is nice, but she makes an uncompelling heroine.  She goes through a number of transformations, but is a slow learner.  Her most common response is the wail that her friends are dead (people die often and repeatedly in this story).  And having set up a very convoluted plot with at least two enemies to vanquish, Connelly has to rush the ending to accomplish it all.  The last fifty pages are mere sketches of a story.