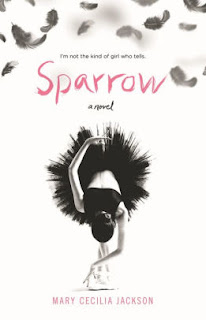 Sparrow is a gifted dancer about to achieve her dream of starring in Swan Lake.  And she's caught the eye of rich and handsome Tristan King, who's become her first boyfriend.  But within a few months, things are going to hell.  Tristan treats her badly and when she tries to break up with him, he brutalizes her and leaves her for dead in the woods.  Her dance partner Lucas, wracked with guilt for not intervening forcefully enough before the assault, throws his own career into a tailspin by trying to administer vigilante justice.  Both of them hit rock bottom and have to learn how to put together their own lives, instead of trying to fix others.

In short, a grueling and ultimately unfulfilling story about rebirth and rebuilding.  Jackson knows how to stage out a traumatic scene and create characters that are deeply hurt, but she doesn't know how to tell the story about how they got there.  Rather than show the descent into hell or the healing to recovery, she simply jumps ahead (a few days, weeks, or months) until we are at the desired result.  Thus, we go from Sparrow and Tristan's first kiss directly to him smacking her around, with no transition and no explanation for why Sparrow stuck around.  The recovery is just as abrupt.  I don't mind reading traumatic stories, but that's because I want to see the process of recovery.  Simply being recovered at the end of the novel is not enough.

The other issue are the characters.  Both Sparrow and Lucas ought to be sympathetic protagonists, given the amount of suffering that they have endured, but they really are not.  Lucas, in particular, has an uncontrolled temper that goes way beyond a fleeting rush of anger.  He's downright pathological (and scary).  Sparrow's grief eventually gets explained, but it's frustrating and hardly as heroic as all the other characters profess it to be.  Perhaps this is realistic, but it's not inspirational.  In order to have a story about horrible things happening to nice people they have to be nice in the first place.