The Poetry of Secrets, by Cambria Gordon 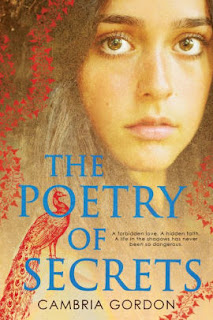 Isabel loves literature and runs risks sneaking out to listen to poetry recitals.  But for her family, recently converted to Christianity to protect themselves from anti-Semitism, life is far too dangerous to run risks.  For while life for the Jews is hard, the conversos are distrusted  even more and subject to much of the same violence.

Isabel has been betrothed to a lawman, who will be powerful enough to protect her, but she doesn't love him.  Instead, her heart belongs in secret to the son of the tax collector.  If that betrayal should ever become known, her fiancé could easily destroy her family -- all the more so when the Grand Inquisitor shows up in their town.

The second historical novel set in 15th century Spain at the time of the expulsion of the Jews that I have read this month. Unfortunately, that makes it hard not to draw comparisons between this one and Larson's (reviewed on April 25th).  Larson's book, while it had a number of anachronisms, makes more of an attempt to recount history and is mor of a survival story.  Here, the focus is on the romance between Isabel and her forbidden love and less on family.  This adds some heat to Gordon's story, but I think I prefer the suspense of Larson's novel.  Either book will give you a good feel for the basics of the historical context, so it's really a matter of your preference for romance or adventure.