What We Found in the Corn Maze and How It Saved a Dragon, by Henry Best 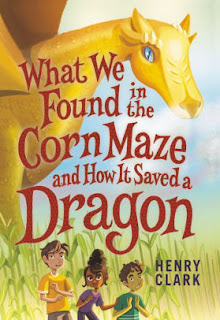 Ever since the DavyTron (which can convert tomato juice into any delicious vegetable you want) came out, the family farm stands of the world have been going out of business.  Cal's family is one of those threatened with foreclosure if they can't make enough money on their corn maze (although some of their troubles date back to Cal's unfortunate accident with the family's Fireball 50 harvester that left it a charred wreck).  Cal could really use a miracle or at least a bit of magic.

And magic is what literally rolls by his astonished eyes when he and his friend Drew witness spare change rolling uphill on the ground in front of them.  They follow the errant coins to their neighbor Modesty, who has learned how to cast a spell that retrieves lost change.  It's one of many spells in a notebook that Modesty discovered in her locker, none of which seem terribly useful.  The spells can only be cast at certain times of day and have limited functions like opening a stuck jar lid or picking something up without having to bend over.

Be that what it may, soon enough the three children find themselves on an adventure to a parallel world called Congroo, which is full of magic.  All is not well there.  A strange force is draining Congroo of magic, leading to global cooling, and it all points back to an evil magician named Oöm Lout.  The DavyTrons back in our world are part of this plan and the kids set out to save Congroo and coincidentally save the family farm by shutting down the DavyTrons.

A wild rollicking adventure that touches on themes of bullying and climate change, but it ultimately just good plain lighthearted romp with magic and dragons.  The story is full of puns and inside jokes for all ages.  So when you've had enough dystopian stories about abused children and just want to have a smart funny adventure, pick this one off the new releases shelf!