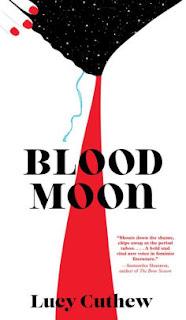 When Frankie and Benjamin start liking each other, things follow their natural progression, except that when they hook up for the first time in what what otherwise have been an amazingly romantic and sexy experience, Frankie gets her period.  She's mortified, even as Benjamin assures her that it's not a big deal to him, but the whole matter seems like something that they can just put aside.  Then someone posts a hideous meme about the incident and suddenly not only the whole school, but the whole world knows about the time that Frankie fooled around while she was having her period.

Who would have done such a thing?  Benjamin denies it was him and the only other likely suspect is Frankie's former BFF Harriet, who has recently grown really mean.  But even she wouldn't be that cruel, would she?  Not that it really matters who did this as the public humiliation is ruining Frankie's life, until she decides to take matters into her own hands.

The novel is awfully thin, written in sparse verse that makes for a very fast read (it took me just over two hours to read the entire thing).  It's not very memorable verse either. While the book is pitched as a feminist paean to body positivity, the incident involving Frankie and Benjamin does not even occur until 140 pages into the book.  The story is really about bullying and the way that social media amplifies and distorts jealousy and petty acts of vengeance.  The themes of sex positivity are clearly reinforced (by both the teens and the adults), but it didn't really sum up to much.