Don't Stand So Close to Me, by Eric Walters 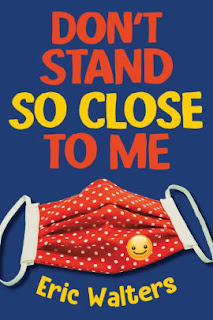 It's early March, six weeks away from the eighth grade dance, and Quinn can't believe that Isaac (the class president) isn't taking it seriously!  There's so much to plan for and so many arrangements to make!  But then at an emergency school assembly, the principal announces that spring break has been moved up and is starting tomorrow (and is being extended for an extra two weeks).  It's all to do with this virus that Quinn has been hearing about from her Dad (an ER doctor at the local hospital) and the need for "flattening the curve."

At first, having a longer break seems like fun, but things are so different and are changing fast!  "Non-essential" businesses are closed and no one is allowed to visit the residents at the local nursing home.  Her father moves down to the basement to distance himself from the family, her mother starts working from home out of their guest bedroom, and Quinn has to attend school through something called Zoom.  When the original date of the return to school is extended out (and eventually cancelled altogether), Quinn begin to wonder if life will ever return to normal.

This short middle grade book, given its topical content and short shelf life, was rushed out in the Fall of 2020.  As such, it's quite rough, with underdeveloped characters and clunky storytelling, but I think it is important that someone attempted to create a middle reader to address all of the changes that went on during the crazy early days of the pandemic.  Years from now, this will make a nice historical novella.  For now, it tells a story to which young readers will personally relate.