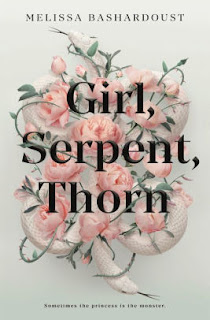 Soraya has lived her life to date as a prisoner in her own home.  Cursed at birth as a result of her mother's rash decision, Soraya is unable to touch anyone without killing them.  As a result, she has to wear gloves to protect others and is secluded in her family's palace as a secret to prevent the shame of her curse from becoming public knowledge.

On the occasion of her twin brother's ascent to the throne and marriage, she is offered the opportunity to break the curse, but it will require her to betray her family.  Despite some misgivings, she does so with the help of a young warrior named Azad,.  But breaking the curse has huge ramifications and it becomes clear that she has only understood part of the story of her origin.

A lush fantasy based on Persian myth and Zoroastrian beliefs.  Soraya is a fascinating combination of anxiety, anger, and long -- very much the paragon of adolescent angst -- and thus familiar and sympathetic in the eyes of young readers.  Her voyage from reclusive outcast to brave leader is a satisfying journey -- part physical and part emotional.  Overall, the result is a sophisticated and enjoyable read, but I found her romantic outings (and implied bisexuality) distracting and forced and the ending exhaustingly heavy with symbolism.