One Speck of Truth, by Caela Carter 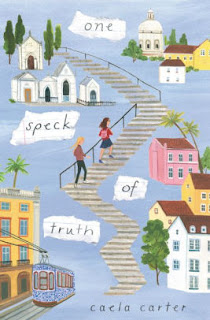 Whenever Alma asks her mother about her father, Mom either gets evasive or angry. Alma knows that he died when she was really young (her Nanny told her that much), she knows his name, and she knows that he was Portuguese -- but that's about it. She can't even get her mother to tell her where he was buried. So, she searches for his grave whenever she can, dragging her best friend Julia around with her, but so far she's had no luck in finding him.

Then, out of the blue, her mother moves them to Portugal.  In the same way that her mother refuses to talk about her father, she is similarly evasive about why they have moved to Lisbon.  But Alma realizes that now she is finally able to meet her father's family and get some sort of truth.

I liked Alma's creativity and energy, but her family really drove me nuts.  The adults in this story are really horrible human beings, gaslighting Alma, outright lying to her, and refusing to answer her questions -- all because of some inflated idea that she isn't old enough to know some version of the truth.  What a load of pretentious crap!  I found the mother particularly self-absorbed and detestable.  Early on, the story intimates that she might be suffering some sort of psychic break from a recent divorce, but really she just seemed selfish. Predictably, Alma emulates her mother and struggles with being honest with the people she loves as well (she at least recognizes the problem and works on it). Still, the rampant abuse in this story really left a sour taste for me.