The Gilded Girl, by Alyssa Colman 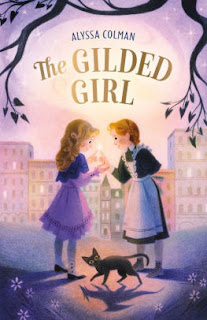 Emma Harris has lived a life of privilege for her first twelve years. Like other girls of her status, her father has now enrolled her in Miss Posterity's Academy of Practice Magic, the best school mastering her "kindling." Emma may be rich, but unable to conceptualize poverty or class, she is open hearted to everyone and clueless of the social norms she is violating.  She doesn't recognize that her fellow students (with the exception of one shy girl) are simply exploiting her for her wealth.  And when she tries to befriend the servant girl Izzy, it is misinterpreted as ridicule.

While Emma and her classmates have a bright future before them, Izzy is condemned to a life of misery.  It's 1905 and, although there is talk in progressive circles about helping the poor, only the rich are allowed to kindle.  The poor are not considered worthy and are required to "snuff" out their magic when it develops in adolescence.  Without the ability to kindle, the poor will then stay poor as the best jobs require magic.

Emma's fortune changes suddenly when her father is killed in the San Francisco Earthquake.  Not only orphaned but destitute, the headmistress forces Emma into servitude to pay off her debt.  Her peers reject her now that she has been reduced to a servant (much to her innocent surprise).  While Emma is forced to work alongside Izzy, the servant girl distrusts her.  But through hard work and a true heart, Emma wins over Izzy and hatches a plan to attempt to kindle by themselves, flying in the face of convention and the law.  To succeed, she has to enlist a variety of allies ranging from a friendly newsie to the "house dragon."

Derived from the classic A Little Princess, the addition of magic is a nice touch, but Colman takes the story much further, adding a stronger theme of socioeconomic equity that draw on the Progressive Movement and the real historical currents of the Gilded Age.  It's a loving tribute to the sentimentality of the period (complete with an over-the-top rosy conclusion) and also a fun magical romp.