The Truth Project, by Dante Medema 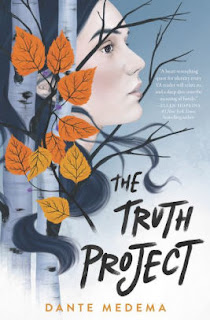 Cordelia is feeling pretty smug about her senior year.  She's going to ace her senior project, basically by copying her older sister's one:  using the results of a genealogy test to create a poem about who she is.  But when she gets the results back, she's in for a big shock:  her sister is actually only her half-sister.  Her father is not her biological father.  Her parents have lied to her!

Feeling betrayed, Cordelia seeks solace from childhood playmate  and occasional heartthrob Kodiak.  Last year, he had a rough time where he dropped out and got his girlfriend pregnant.  Now that he's putting his life together, he can appreciate the difficulties that she is having coping with the lies.  While her mother discourages her, Cordelia reaches out to her biological father and immediately feels a strong bond.  In her mind, he's the missing link and suddenly all the times she felt like an outsider make sense.  But he's also surprisingly reluctant to meet her  in person and the harder she pushes for direct contact, the more he pulls away.

A story about the meaning of family and identity (spoiler: it's more than DNA) told in a mixture of verse, snippets of IMs, and emails.  The format is thin and the many half-blank pages make this book a really quick read.  There's plenty of drama but not much depth and Kodiak's story, while interesting, is not always a good fit and becomes distracting.  Occasionally, it provides useful contrasts (e.g., when comparing the circumstances of Cordelia's inception and Kodiak's previous year misadventures).  Still, it feels like a weak link in the story.

Placed in Alaska, where there ought to be lots of potential for scenery and local color, the setting is underexploited.