These Vengeful Hearts, by Katherine Laurin 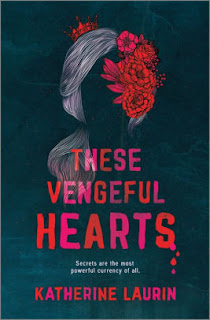 Ever since her older sister was permanently crippled during a high school prank run amok, Ember has wanted to wreak vengeance against the secret society that was responsible for the injury.  The Red Court is an anonymous group of girls at her school who have the ability to grant anyone's wishes and the power to enforce their will through blackmail and extortion.  Once you've engaged the Red Court, you can be sure of two things: what you ask for will happen and you'll then be permanently in their debt.

Ember is determined to take them down and gets herself invited to become a member with the intention of destroying the organization from within.  Her plan is to work her way up the ranks from a lowly initiate to the inner circle, where she'll expose the "Queen of Hearts" who leads the group.  But despite her intention to avoid causing harm along the way, she finds that hard to do as a member.  Instead, as she gets sucked into the string of lies and deceit that the group relies upon, she finds that  she is losing her bearings, her moral compass, and her friends.

The characters are not well drawn and are developed unevenly (Ember's sense of horror in discovering that she enjoys extortion is more stated than shown, her aversion to committing her assignments cursory and shallow, and the on-off relationships with her allies confusing). With few to no sympathetic characters, the book falls back heavily on the plot, which is all over the place! Possibly (just possibly) a younger teen reader might find this story plausible, but most readers will recognize how silly the set up and the entire plot is. The author is at extreme pains to explain how this amazingly fragile arrangement could work, frequently revealing in the exposition why it really would not.  There's also this annoying repeated attempt to debate the morality of the group, but it falls on the same silly arguments (the people who ask for the favors are as guilty as the Red Court members) that grows weaker and weaker each time it is brought up.

Still, readers might enjoy this simply for the campy fun of watching mean girls exercise power.  After all, this is breezy read!  But we've seen much better versions of this story before.