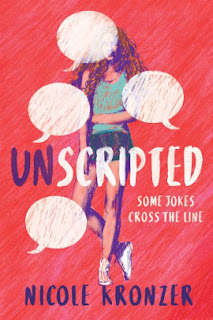 Zelda is dreaming of breaking into the Big Time in comedy, landing a job at Second City before getting plucked up by Saturday Night Live.  She's completely excited about the summer she is about to spend at improv camp.  If she can only land a spot on the camp's varsity team, she'll be able to perform for the famous alums who come back to watch the end-of-camp show!

Winning a spot turns out to be the least of her challenges.  Her fellow teammates are sexist jerks, who try to sabotage her performances and make her look bad.  Ben, the team's sexy coach, is the worst of the bunch.  Confusingly for Zelda, he's nice when they are out of practice.  He seems to be taking a special interest in her.  A wallflower, Zelda is flattered by the attention and Ben's blatant grooming, but things still feel off and fellow campers and Zelda's brother try to warn her off.  When Ben becomes possessive and violent, Zelda doesn't know how to cope.

This is a book that I had a hard time getting through.  Reading it was fine.  It was well written, the pace was brisk, and the story quite compelling.  However, Ben was repulsive and exaggerated to the point of caricature and Zelda was simply too wobbly and weak.  I understand the author's intention to show the importance of fighting back against sexism and violence, but when the villain is this transparent, there really is no justification for Zelda's perpetual stupidity while her friends and family spend most of the book giving her good reasons to get smart.  With so many reasons for Zelda to end this, the only reason that Zelda didn't stand up for herself seemed to be so the story would run a few more pages (oh! how I longed for us to reach whatever the page minimum for the contract was!).

All this dumbing down basically teaches young women is that bad men are pretty easy to identify and you'd have to be a moron to keep hanging on to them. I could find zero reasonable motivation for Zelda to not turn Ben in to the authorities, but that isn't realistic. In the real world, abusers are far less easy to identify and the forces that keep women from turning them in far more difficult to overcome.  Zelda has a group of supportive friends, a brother backing her, and even several grownups ready to come to her aid.  Few abused women have that much.  I too believe that #MeToo stories need to be told, but I want them to be mildly realistic so young readers understand the challenge.