You Know I'm No Good, by Jessie Ann Foley 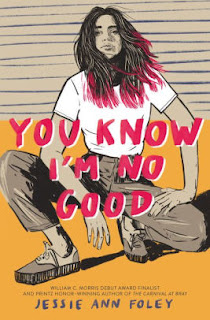 Mia is trouble.  She's never found a drink she wouldn't drink, a drug she wouldn't take, or a guy she wouldn't hook up with.  And when she assaults her stepmother, it's the last and final straw.  Her family has her sent to a rehab facility out in rural Minnesota.  She's furious about her involuntary relocation, but she doesn't really blame them.  After all, all she's been doing for the past couple of years is screwing up.  Her father and stepmother blame her bad choices on the lingering trauma of her mother's death, but Mia herself figures her behavior is just because she's a no good slut.  Tracing how she actually got from her brighter beginnings to this nadir is half of the journey of this novel.  Getting herself back out is the rest.

There are plenty of examples in the troubled-teen-in-rehab genre and while this follows the general model, it breaks from it in notable ways.  As usual, the reader is only slowly brought in on the details and Mia performs the duty of unreliable narrator with aplomb.  She rations out the facts slowly enough that gradual enlightenment substitutes for drama for most of the first 150 pages or so.  Similar to other examples in the genre as well is the colorful cast of misfits that our heroine meets in rehab.  Sympathetic counselor?  Check. Sadistic warden? Check. All per plan.

But these things are simply the furniture that makes the more complex story of Mia herself easier to tell.  She's a much deeper and interesting character for one thing.  She's certainly self-destructive but she's really conscious of her decisions.  The contrast between her anger and rage with her rationality is a shock.  And while she's self-critical, she's never self-pitying.  Mia, in a word, is compelling and wanting to find out what happens to her will keep you turning pages. The ending itself turns out to be is a real surprise (aliens invading Minnesota would have been more expected than what happens here) but is satisfying.  So, while this is a yet another book in a heavily used setting, this novel is a strong contribution.