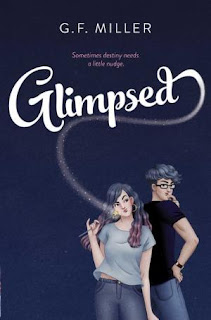 Charity is a modern-day fairy godmother.  Thanks to powers she inherited from her grandmother, she receives "glimpses" of the future that reveal some heartfelt dream of a stranger.  Far from benevolent, once she has had a "glimpse" she is physically obligated to do what she can to help the people involved (who she calls her "Cindies") realize their goal.  She's long seen this secret responsibility as a series of good deeds, but when she is confronted by Noah (a very angry victim of one of her projects) and another glimpse goes very very badly, she begins to wonder if this is really just a terrible curse.

Meanwhile, Noah blackmails Charity into helping him undo the damage of the glimpse that hurt him.  At first unwilling collaborators, the two of them predictably grow close.  That complicates the plan, which involves Noah finally getting back the love of his life -- another girl named Holly.  Will Charity successfully bring Noah and Holly together or will the growing affection between Noah and Charity undo it all?

Cute concept, with a well-written story and decent characters, but the book is grating.  The issue is poor storytelling.  Miller knows what she wants to happen, but her delivery is clunky and out of proportion.  The initial tension between Charity and Noah starts with them spraying each other with chemical weapons and Noah threatening Charity!  Once written into that corner, it is a major chore to bring our protagonists into romantic bliss.  Every dramatic moment in the book is like that -- exaggerated and so uncharacteristically shrill that they seem like they are from a different story.  Even the predictable happy ending is cringeworthy and over the top.