Kind of a Big Deal, by Shannon Hale 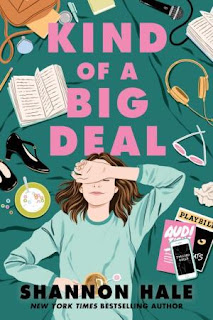 Josie peaked in high school.  Back then, she was the indisputable star of the stage.  When she won a nationwide drama contest, her teacher encouraged her to leave school and go to Broadway.  But life in the Big Apple was not the same and she quickly washed out.  Now, she nannies for a little girl in Missoula and tries to save money to pay off her credit card debts.  She's not only lost her dream, but also alienated her friends and grown distant from her family.

One day she walks into a bookstore and her life changes.  She hasn't read a book since high school and certainly not read one for fun for longer than that, so the owner talks her into taking a book (and throws in a pair of reading glasses since she finds she has developed nearsightedness).  Sitting in the park while her charge plays, she gets immersed in her book.  Literally completely immersed.  She's become a character in the story and while days pass by for her, when she is finally done (and finds herself back in the park) only mere moments have gone by.  This starts a new set of adventures for Josie.  But these immersions are far from harmless and by the time Josie realizes how much the books are changing her life (and not necessarily for the better), it is too late.

Shannon Hale is a very inconsistent writer in my experience.  I loved Princess Academy, Book of Thousand Days, and the Bayern series, but her more recent books have generally lost me.  This novel unfortunately continues that trend.  The device of the immersive books is very clever and it allows Hale to engage in some really hilarious skewering of a number of YA genres (e.g., romances, rom coms, zombie apocalypse stories, and even graphic novels) that really deserve to poked out.  I loved this part of the book and if she had managed to tie everything together in the end, this book would have gone down as one of my favorite YA satires (following in the absurdist traditions of writers like Libba Bray), but the ending tries to get too serious and is an absolute disaster.  It's as if Lemony Snicket wanted to write a problem story.  With a conscious effort to tie up her loose ends, Hales gets buried in all the inconsistencies (which were unobtrusive in a satire but are now glaring in her late conversion to realism).  The result is humor is far too mean to be taken seriously, a story far too wild to be explained, and characters too symbolic to be meaningful or interesting.