One Jar of Magic, by Corey Ann Haydu 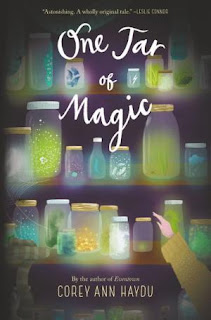 In Rose's town, people collect magic in jars.  Big magic, small magic, magic that makes rain, magic that turns your finger nails pink forever.  And in Rose's town, it's her father who has amassed the largest collection of magic.  It is her father to whom the town turns when they need some special sort of magic.  Magic makes you powerful, says her Dad, and the more magic you have the more important you are.  Her father is very important.

Gathering magic isn't something you can do until you turn twelve.  And so the children look forward to the first time they will be able to fill their own jars.  They wonder how many jars they will fill.  But Rose doesn't worry about it because Dad has told her that she is special just like him.  He calls her "Little Luck" and tells everyone how powerful she'll be.  She believes him.  She always believes what he says because when she doesn't do so bad things happen.  And while she isn't really sure herself, she won't tell him her doubts because that will just make him mad.  And she doesn't want him to be mad.

The great day comes when Rose will go out and gather her first magic.  However, it doesn't turn out the way anyone expected.  Try as she might, she ends up with nothing more than a tiny bit of magic her brother helped her catch.  Why?  What does it mean that she wasn't the great magic collector her father said she would be?  And if she is in fact not intended for magic, who is she?  For years, she's made fun of the others for not being as magically-inclined as her family so payback is being subjected to the ridicule of her peers.  Worse though is how her father treats her for not fulfilling her promise.

This strikingly beautiful and original meditation on self-acceptance stands out as one of the best books of 2021. The magic that Rose's family collects in jars serves in so many roles.  First, as metaphor for status and prestige.  Second, as means to pursue the tragic consequences of greed and its accompanying corrosion of the family.  Third, as a safe way to explore the darker topic of domestic violence that lies underneath all of this.  Finally, as a device through which Rose rebuilds her sense.  This relatively simple concept also allows Haydu to delve into a variety of other topics like peer pressure, possessive friendships, bullying, crushes, and forgiveness, amongst others.  The result is a very dense book that delivers a strong emotional statement, but the text with its graceful prose feels light.  With such potentially triggering subjects, it is striking that one comes out in the end feeling refreshed and inspired (instead of drained and spent).

Haydu has written several lovely books (I have given strong positive reviews to at least two of them) but this novel is truly on a different level.  Strongly recommended.