The Love Curse of Melody McIntyre, by Robin Talley 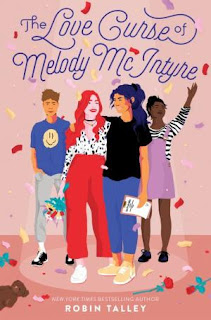 Mel lives for the theater and she has the fortitude and the organizational skills to have earned the right to be the youngest stage manager at her school.  But where she is able to keep a hundred things straight and solve others' problems without hesitation, her own life is a mess.  When her last relationship blew up spectacularly during the opening night of Romeo and Juliet, she made a promise to not fall in love with anyone again until after the Spring musical was over.  While her promise was not sworn in blood, it might as well have been!

Legend has it that the theater is cursed and the only way to avoid having a play performed there from falling apart into chaos is to perform a wide variety of "countercurses." So, for example, if an actor whistles or someone utters the name of the Scottish Play, there are ways to undo the damage.  But the most important thing is a special rule that the stage crew come up with each production.  And after the R & J disaster, the crew has decided that Mel's forswearing of love and romance should be the magical key that protects their next production.

Mel doesn't foresee the obvious:  that she won't just fall in love during the production of Le Mis, but that it will be the Love of Her Life.  But what are superstitions anyway?  How could Mel falling for pretty Odile be anything so cataclysmic?  But then the accidents and misfortunes start to beset the production.

Talley got some great advice and details to put in her book, but there's a stiffness to the storytelling that betrays her lack of comfort with the world of high school drama.  Too many details are dropped in for authenticity, rather than importance to the story, so I felt like Talley was trying to earn cred rather than describe kids doing a play.  Mel is too perfect (and too polished) to be believable, her fellow crew members too professional, and the always fascinating tensions between cast and crew too unexplored.  This is high school drama as it likes to describe itself, rather than as it actually is.

At over 400 pages, this is a long novel that doesn't offer enough of a payoff to reward the investment.  For a well-written book with some decent characters, it felt strangely cold for what should have been a heartfelt exploration of letting go.  Mel's blind spot for nurturing her own needs sits like the elephant in the room.  Like Mel, Talley races to bury herself in technical details of drama whenever the emotions start to get interesting.  While Mel has some growth at the end, it isn't really clear even in the epilogue that she's found life-work balance.