This Will Be Funny Someday, by Katie Henry 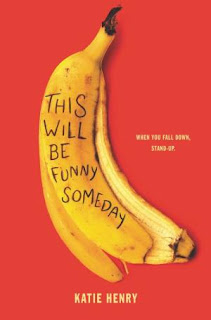 Isabel is a good kid.  She doesn't cause any trouble at home, she gets good grades, and she doesn't make waves.  With her popular but controlling boyfriend Alex, Isabel always does whatever she can to be pleasing and smooth out conflicts.  But she misses the best friend that Alex made her dump, she feels hurt that her mother can never make time to be with her, and she's tired of always worrying about what everyone thinks of her.  She has plenty of thoughts, but no confidence to express them.

By a series of accidents, she finds herself on the stage at the open mic of a local comedy club.  To her surprise, she loves it and the whole opportunity to speak out on the things she hasn't felt able to before.  Afterwards, a group of fellow aspirational comedians invite her to tag along with them.  The problem is that they are all in college and she is still just a junior in high school.  Afraid that they won't like her if they know the truth, she lies and claims to be a college student just like them.  And while that lie creates tension and causes trouble, the liberating effect of her new persona as "Izzy V" are too important for her to ignore.

While this novel exhibits all of my least favorite YA tropes (e.g., lying when you know you'll get caught, refusing to seek help from friends and trustworthy adults, imagining that you are the center of the universe, amongst others), it deals with Izzy's failings in a very smart way.  For while Izzy's self-centeredness and dramatics are cringeworthy, they are called out.  The seemingly endless times that her friends advise her to smarten up eventually have an impact.  And, best of all, the dramatic payoff at the end isn't just a forgone conclusion, it's a well-earned dividend that exceeds expectations.

Henry hasn't uncovered any new territory in the topic of confidence-building, but with Izzy she has created a heroine who gives you something to cheer about.  Izzy doesn't just grow a backbone through self-reflection, she shows the way forward in a satisfying story of self-realization and growing assertiveness.  The result is a story that validates the fears that young women have about putting themselves forward and celebrates what successful personal development can look like.