Yesterday is History, by Kosoko Jackson 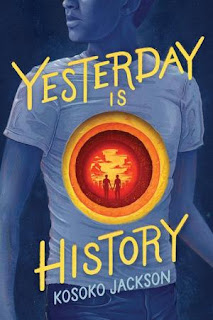 Recent kidney transplant recipient Andre considers himself pretty lucky to be alive. He's not simply gotten a chance to live his life, he has acquired a surprising side effect: the ability to travel back in time for brief periods.

One moment he's in his bedroom and it's 2020 and then suddenly it's 51 years earlier and he's in the same house -- with house's inhabitant Michael.  Michael is surprisingly nonplussed to see Andre and they hit it off.  But just as soon as he arrived, Andre is back in the present with lots of questions.  It doesn't take long to get answers when the family of the donor of Andre's new kidney contacts him and urgently wants to meet.  In a hastily arranged gathering, they explain that they are time travelers and when their son died and his kidney was transplanted, it apparently transplanted some of the dead boy's abilities to Andre.

To make sure that Andre uses his powers properly and responsibly, the dead boy's brother Blake becomes a reluctant teacher.  This is awkward and strained and made all the more so by a romantic triangle that develops between Andre, Michael (the boy in the past), and Blake.

I loved the character of Andre.  He's intelligent and a great mix of driven and impulsive.  He's also one of the more authentic black male characters I've seen in YA.  It's a role that could easily have been overblown (particularly when he's gay as well).  I also liked this particular vision of time travel, which focuses more on the emotional impact of being able to see the past than the usual scientific and ethical paradoxes.  The dialogue and the pacing are both brilliant.  I cared less for the wasting of characters (like Andre's alleged best friend Imogene who gets almost no air time) or the half-hearted love triangle.  Jackson does such a great job fleshing out Andre, but the two love interests were boring and there was almost no spark there.  I was supposed to feel some great poignant pain at the end, but it really comes across flat.