Between the Bliss and Me, by Lizzy Mason 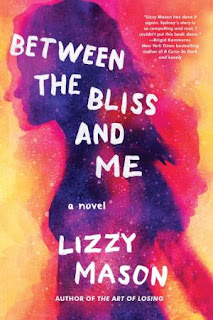 While Sydney sometimes imagines that her Dad is right there with her, she knows that he's somewhere else.  Addiction destroyed his life and he abandoned the family long ago.  Sydney is certain that it's part of the reason her Mom has always been so clingy.

Mom's long insisted that Sydney should go to Rutgers when she graduates and live at home, but Sydney has her heart set on NYU.  NYU offers more options and it also puts her nearer to her crush Grayson.  Thanks to her grandparents, she can afford the tuition.

When they also kick in a generous graduation present to boot, Mom blows a gasket.  But why won't Mom let go?  It's not as if New York City is all that far away from central New Jersey.

Sydney flees to her grandparents' beach house for a week, where she learns some facts about her father that she never knew, in particular about the decline of his mental health and his current whereabouts.  Burdened with disturbing new information, she reexamines herself and her choices.

The story starts out strong as a study of Sydney and the way she copes with devastating truths about her family and herself, but it gets dragged down into the issues of how mental illness is mishandled.   There's a lot to be said about gaps in healthcare, underfunding of social services, and the difficulties of recovery, but there really is too much to say to cram it into a novel (not that that stops Mason from trying!).  By the second half of the book, the action has become simply a device for Sydney to engage with various people (e.g., grandmother, mother, family lawyer, psychiatrist, police officer, etc.) in long expository discourses about mental health and public policy.  The dialogue sounds less and less authentic, sapping the energy out of the story.  My interest in the characters waned and I ended up browsing through the last thirty pages just to finish it off.