Home Is Not a Country, by Safia Elhillo 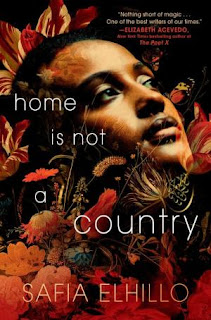 Nima knows that she wasn't meant to be called by the with which she ended up.  Her mother had intended to name her Yasmeen, but after her father died she became Nima instead.  It's a fine name, but Nima can't help but feel that her mother would love Yasmeen more than she loves Nima.  And after a random act of violence puts her best friend in the hospital, Nima finds herself transported to an alternate reality where Yasmeen exists and her father is still alive.

Exploring Nima's identity as an Arab American just after 9/11 through verse, Elhillo's novel is startlingly original.  It is also a bit weird.  The jarring shift from a very realistic depiction of fear and violence in the aftermath of the terrorist attacks into magical realism takes some getting used to.  Yasmeen appears first as a voice in Nima's head, changes to another physical person and then takes over Nima's self, before eventually becoming a conscience or some sort of jinn.  If you like the vagueness of this idea and a story whose meaning is open for discussion and debate, this is a great choice for you.  I found the verse hard to read and was put off by the story.  Pretty but tedious.