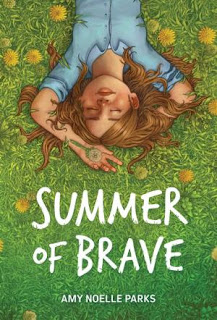 Lilla doesn't think of herself as dishonest, but according to her friend Vivi, every time she says something is OK when it isn't or stays quiet instead of speaking up, she's not being truthful.  Vivi thinks it's time for Lilla to be brave.  But is it worth the risk?  Lilla sees how much easier it is to just go along, to pretend that you want the same things as your friends, or that you are happy doing the things your parents want you to do.  What does it really matter that she would do things differently?  Most of all, she just wants people to be happy with her.  However, it's hard to please everyone all of the time and Vivi has a point about the dishonesty.

When Lilla thinks about it, there are a lot of thinks that she doesn't speak out about.  Her parents are divorced and have developed an elaborate plan to share her between them.  Never mind that Lilla doesn't want to always be evenly split up.  Everyone thinks she should apply to a magnet school.  The only thing that they can't agree upon is whether she should focus on arts or sciences.  Lilla doesn't want to go in the first place, but her parents just assume that she's acting up.  Finally, when Lilla has to deal with sexual harassment from a fellow staff member at the museum summer program where she is volunteering, she is astounded when the supervisor downplays the incident.  Standing up for yourself isn't just about honesty, it's important for your well-being as well!

While I found Lilla implausibly articulate for a twelve year-old, that didn't really bother me.  Her anxiety about being taken seriously and her fear of standing up for herself are emotions that young readers will relate to.  That Lilla speaks out for herself impressively merely makes her a better role model.

Parks's story touches on so many important issues: the importance of honestly in friendships, of being heard within families, of defining safe boundaries, and of learning to communicate clearly and persuasively.  The book shows Lilla making good choices and difficult choices, and communicating those to her friends and to adults.  While she gets push back, she eventually is able to get even the grownups to respect and honor those choices.  In doing so, the author shows that if you can find the strength to say what you really want that you can realize your dreams.  The flip side of this is that no one likes someone who they can't trust to be honest.  These are good lessons for adults as well as twelve year-old girls!