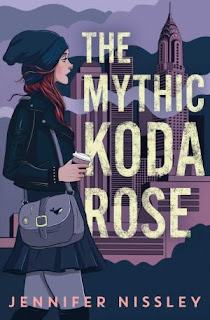 The illegitimate daughter of a famous dead rock star, there are plenty of people who know more about Koda Rose's father than she does.  She's not even a fan of his music.  She wishes it was different, but her Mom didn't really know him and has never really encouraged her to find out anything on her own.  Instead, she has tried to shelter Koda from the public eye.

As a result, Koda has developed a sense that somehow if she knew her father better, it would give her strength to work through her issues.  She certainly has plenty of her own issues, ranging from her social awkwardness to dealing with her infatuation with her best friend.  So, when she crosses paths with her late father's last girlfriend Sadie, it's an opportunity she cannot resist.  She befriends the woman and finds herself idolizing her, blind to the obvious reality that Sadie is a junkie.  For Koda Rose, all that matters is that Sadie is a connection with her Dad and she starts engaging in riskier and riskier behavior (throwing aside her mother, friends, and life) to follow Sadie.

I had occasional trouble keeping up with Koda Rose's erratic behavior, but I found the story complex and engaging.  The relationship triangle between Koda, her mother, and Sadie is nuanced.  It would be easy to imagine the two older women still harboring jealousies and anger from their youth over the lover that they shared, but neither one does.  For Koda, who imagines this non-existent conflict most strongly, this is deeply unsettling.  She needs her mother and Sadie to be at each other's necks and when they aren't she is forced to accept that her issues are really her own. While Sadie has serious issues, it is ultimately Koda who has to sort out the most.  The novel's lack of any effective resolution, while very frustrating, is ultimately the more realistic option, leaving open Koda's next steps for the reader to imagine.