The Summer of Lost Letters, by Hannah Reynolds 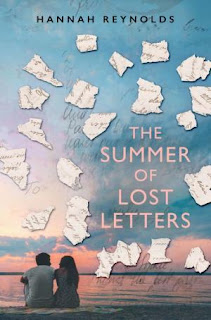 The discovery of a cache of old love letters that were sent to Abby's late grandmother sets off a great adventure. They aren't from the man who became her grandfather and, while Abby has no problem imagining that her grandmother might have dated someone else, she's surprised that she's never heard of the guy.  Through some sleuthing, she tracks downs the mystery man, Edward Barbanel.  He is still alive and lives in Nantucket.

Abby's grandmother came to the United States as a Jewish refugee in the late 1930s and - as far as Abby knew -- lived in New York City.  But apparently for at least some time she lived with Edward's family in Nantucket. With a dull summer between her junior and senior years before her and a growing obsession with this mystery, Abby decides to take a job on the island.

The problem is that the man -- a retired patriarch of a large wealthy clan -- doesn't respond to her inquiries, so she sneaks herself onto the family compound as a caterer.  While undercover, she becomes entangled with Noah, Edward Barbanel's handsome and suspicious grandson. who tries to stop her from her search.  He fears that her digging in the past will just cause friction in the family and he distrusts Abby's motives.  But in the end, he grudgingly helps her and she equally reluctantly follows his guidelines.  As the two dig deeper, the surprises start popping up, family secrets are unveiled, and (of course) Abby and Noah fall in love.

For the most part, this is a pretty typical beach romance material, but the mystery of the hidden romance (and a parallel search for a missing necklace) adds a nice dramatic element.  I actually found the mystery more compelling than the romance, but that was mostly because the romance was unambitious and cliched (poor girl falls for rich boy).  Most of the characters (the roommate, Abby's mother, the boss, Noah's family, and even the grandmothers) are throwaways but Abby and Noah themselves are interesting.  It all takes place in a beautiful picturesque setting that Reynolds gives us in lovingly tour guide presentation.  Entertaining fluffy fun that reads fast.