Too Bright to See, by Kyle Lukoff 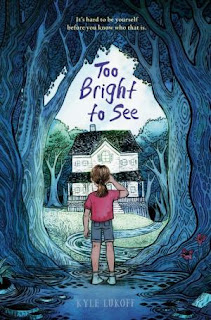 After the death of Bug's uncle, Bug starts to think about his uncle's life.  Bug's late uncle was a drag queen and loved fancy dresses and wearing make-up.  Bug's best friend Moira is big into make-up and boys.  She keeps trying to convince Bug that, with them both starting middle school in the Fall, they need to start learning how to be pretty, wear dresses, and wear make-up.  But Bug doesn't like to wear make up and dresses feel weird (even though they are pretty!).  Does that make Bug less of a girl?  Or is the truth that women and men don't all have to be a certain way (like how Uncle Roderick was more girlish than Bug).

Bug's house has always seemed haunted and during the summer it seems that the ghost of Uncle Roderick is haunting them, trying to get a message to Bug.  Be yourself, the ghost seems to be saying.  But what does that mean?  What is Bug supposed to be?

Too Bright to See is an unusual story that mashes up two middle reader favorites -- a haunted house adventure and a friendship story.  While trying to uncover why things are going bump in the night, Bug and Moira struggle with the way they are changing and drifting apart.  While it sounds discordant (and I wouldn't call this a particularly good ghost story), it all comes together surprisingly seamlessly in the end into a story about identity.  I found the ending saccharine and the characters unrealistically cooperative, but it's an uplifting story that addresses issues of gender identity in an age-appropriate and positive way.