We Are Inevitable, by Gayle Forman 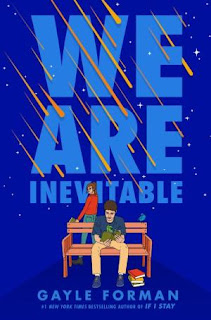 When an asteroid hit the earth and wiped out the dinosaurs, the effect wasn't instantaneous.  It took thousands of years for the dinosaurs to die out.  Did they realize it was happening, wonders Aaron.  Do we ever realize that the asteroid is barreling towards us and our remaining time is limited?  Aaron is sure that he doesn't want to be a dinosaur, but stuck working at his family's dying book store it's hard not to feel the inevitability of his demise.  Aaron's brother's addiction wiped out their money, the collapse of the local economy and poor business acumen is running the book store to the ground.  Aaron decides to avoid the inevitable by selling the store.

No sooner has he completed the arrangement, but a group of townspeople get it in their heads to save the store, volunteering their time and their own savings to rebuild the space and turn it into a better place.  It may be too late for Aaron to take back his decision to sell but that may not matter because he honestly doesn't want it anymore.  But with some help from friends that Aaron doesn't want, a girlfriend he wants for all of the wrong reasons, and the funniest gathering of old lumberjacks to grace a novel, Aaron is about to redefine what inevitability actually looks like.

A lively, well-crafted novel that is the perfect delivery vessel for an unworthy story.  The lumberjacks steal the show with their bickering over construction techniques and literature.  Aaron's unwanted sidekick, Chad the paraplegic, provides additional comic levity.  Romantic interest Hannah gets the best snarky lines.  The rest I can take or leave.  Aaron himself is whiney and tedious. He's also the annoying stereotypical YA boy -- profane, obscene, and immature -- and ultimately boring.  The story drags and isn't worthy of the strong supporting characters.  The message (that we frequently blame others to cover up the things we won't face ourselves) just isn't all that profound.