Where the Road Leads Us, by Robin Reul 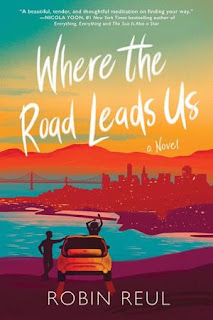 Jack may be functionally living alone (with an absent mother and a dead father) but his life seems pretty good.  He has everything figured out for him.  He's got a girlfriend who is going out East with him.  He's about to graduate and go to Columbia.  But on graduation day, the only reason he drags himself to the ceremony is because he's the valedictorian.  No one cares what he says in his speech and he never actually finishes it.  His girlfriend dumps him

Jack realizes that the one and only thing he really wants to do is to go to San Francisco and find his brother, who's been lost to addiction for the past two years.

Hallie is struggling with cancer and it hurts her to see the way that her medical expenses have destroyed her parents' finances and their dreams.  She does whatever she can to help them but realizes that the next big incident could bankrupt them entirely.  But more immediately she's desperate to get to Oregon where a fellow cancer patient has given up and is about to terminate his life.  There's no time to lose.  With some help from a friend, she figures she can make it up and back on the bus fast enough that her parents won't notice.

Many typical road trip adventures await on their road trip from LA.  Coincidence finds Jack and Hallie on the same rideshare to the bus station.  Bad weather and a few more coincidences cause the driver to take them north himself up to San Francisco, where everyone strikes out on their own adventures.

The story itself follows the usual pattern of anecdotes and adventures, humorous encounters, and life growth, but Reul does manage to infuse some freshness into the story and create characters that are familiar but nuanced.  It never really grabbed me as a particularly exciting story, but the writing has an element of surprise throughout that kept the story interesting.