Wider Than the Sky, by Katherine Rothschild 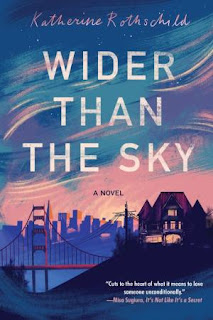 Without any explanation, Sabine and her twin sister Blythe are moved to a run-down old mansion outside of San Francisco just a few weeks after the death of their father. Charlie, a man whom the girls have never met, is living with them for some reason.  Mysteriously, he seems to know a great deal about them.  Their mother seems fine with all of this and is evasive, refusing to provide a satisfactory explanation.  Naturally, the girls start sleuthing.  The answer is complicated and causes Sabine in particular to reevaluate her feelings about her father.

Meanwhile, the house itself is under renovation, in a plan apparently being run by Charlie. Sabine learns quickly that the plans violate local zoning ordinances, which in turn are rigorously enforced by a crotchety old woman who is threatening to seize the property unless the project is stopped.  The resolution to the problem will rely upon small-town insularity, some minor coincidences, and Sabine's tireless efforts.  Along the way, Sabine makes a series of poor and hurtful decisions that ultimately complicate everything.

Sabine and her selfish and downright mean decisions (which range from trying to ruin the house renovations to betraying her best friend) make for an unlikable protagonist.  She has a lovely quirk of "poeting" (where she starts word associating in the style of Emily Dickinson) but is otherwise largely irredeemable.  Perhaps, the author could have saved this clever piece of schtick for a more likable character -- it plays no role in the plot.

To provide a level of suspense, the story relies on an implausible level of secrecy, which begins with the crazy idea that a mother would uproot her daughters just days after their father's funeral without any attempt to explain why she was doing so.  The eventual solution to the housing problem is similarly strange and, while it draws on a number of ideas that have been developed throughout, felt strikingly out of the blue.  All of this speaks to a plot that was straining at the seams.

Final note:  Apparently, neither the author, the editor, nor any of the reviewers know the difference between legislation and litigation -- lawyers do not legislate, they litigate.  So, I guess it is a good thing -- as her dedication reveals -- that her Dad talked the author into being a writer rather than a lawyer.