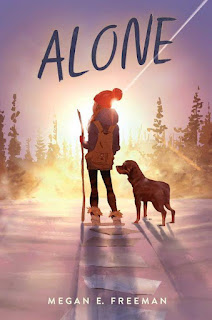 Twelve year-old Maddie had only intended to have a secret sleepover with her best friends, but it has turned into a disaster.  They didn't even show up so she is stuck at grandparents' empty house by herself.  In the morning, she wakes to a shocking surprise:  everyone in her town is gone!  An emergency evacuation in the night transported everyone away and left her behind.

She doesn't know where they have gone but quickly realizes that her chances of survival will be greatly enhanced by staying put.  And as days turn to weeks and to months, that is what she does, managing to scavenge for food and supplies, avoiding looters, and surviving a series of natural disasters.  In these tasks, she proves remarkably resourceful following her intuition and practical problem solving skills.  But she finds that the hardest obstacle is loneliness and the emotional distress that being alone brings.

A gripping and fairly dark survival story, this novel-in-verse is a far cry from Home Alone.   I found it nearly impossible to put down as Maddie faces continual existential threats that I felt compelled to read to conclusion.  I would not have thought that verse novel would carry enough impact to grab me but in fact the structure is a strength: the spare nature of the verse was really effective at conveying how Maddie comes to live more and more within her head.

The story did start to drag towards the end and the ending itself is disappointingly anti-climactic, but I really enjoyed the trip getting there.  Maddie is a compelling heroine, smart and tough. She has a playful side too, but when it matters she makes the good choices and saves herself (as there is no one else to do it).  An excellent read.